Robert J. Horton was born in Coudersport, Pennsylvania. As a very young man he traveled extensively in the American West, working for newspapers. For several years he was sports editor for the Great Falls Tribune in Great Falls, Montana. He began writing Western fiction for Adventure magazine before becoming a regular contributor to Street & Smith's Western Story Magazine. By the mid-1920s Horton was one of three authors to whom Street & Smith paid 5c a word - the other two being Frederick Faust, perhaps better known as Max Brand, and Robert Ormond Case. Many of Horton's serials for Street & Smith's Western Story Magazine were subsequently brought out as books by Chelsea House, Street & Smith's book publishing company. Although virtually all of Horton's stories appeared under his byline in the magazine, for their book editions Chelsea House published them either as by Robert J. Horton or by James Roberts. Sometimes, as was the case with ROVIN' REDDEN (Chelsea House, 1925) by James Roberts, a book would consist of three short novels that were editorially joined to form a "novel". Other times the stories were serials published in book form, such as WHISPERING CANON (Chelsea House, 1925) by James Roberts or THE MAN OF THE DESERT (Chelsea House, 1925) by Robert J. Horton. It may be obvious that Chelsea House, doing a number of books a year by the same author, thought it a prudent marketing strategy to give the author more than one name. Horton's Western stories are concerned most of all with character, and it is the characters that drive the plots rather than the other way around. It is unfortunate he died at such a relatively early age. Many of his novels, after Street & Smith abandoned Chelsea House, were published only in British editions, and Robert J. Horton was never to appear at all in paperback books. GUNS OF JEOPARDY will be his next Five Star Western. 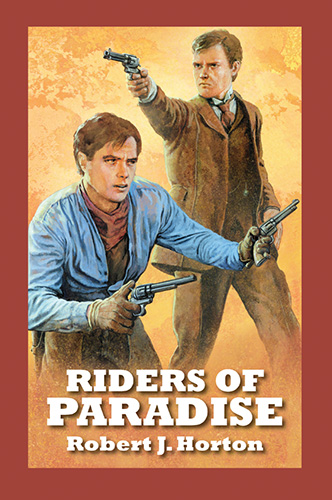